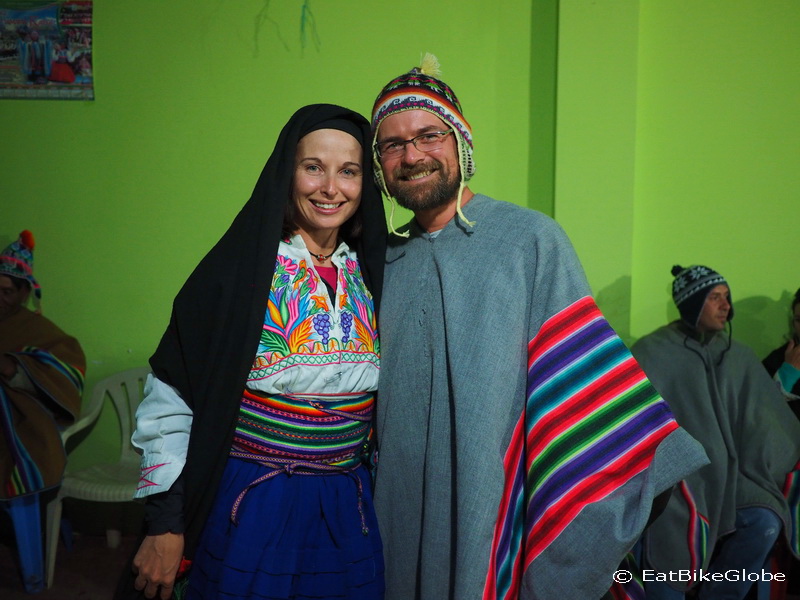 In addition to visiting Machu Picchu with Aleecia, we went on a 2 day, 3 Island Tour on Lake Titicaca, where we visited one of the Uros Floating Islands, Amantani Island and Taquile Island. We don’t normally like organized tours, but this one was something special. This had nothing to do with the tour company or our guide (who was pretty average and spoke horrendous English), but because of the warmth and generosity of the local people, especially on Amantani Island.

The tour departed from Puno, an unremarkable tourist town on the banks of Lake Titicaca. Lake Titicaca straddles Peru and Bolivia and is the highest navigable lake in the world at 3812m above sea level – pretty cool, unless you have altitude sickness like Aleecia.

All three islands that we visited were on the Peruvian side of the border. The tour was very reasonably priced at around 100 soles (USD 30) per person, including all boat transfers, meals (except lunch on Taquile Island), homestay and the guide.

After an hour or so in the boat, our first stop was at one of the tiny Uros Floating Islands. There are 42 of these little manmade reed islands floating on Lake Titicaca. It was fascinating to learn about how the islands are made, as well as the day-to-day life of the Uros people. The Uros are descendants of pre-Incan people and the floating islands were originally built for defensive purposes, as they could be moved if the Uros felt threatened.

Living on a floating island may sound idyllic, but the reality seemed pretty tough – almost like permanent camping, only harder. The reeds making up the islands grow in the lake and constantly need to be replaced and the islanders have to paddle to a little “toilet island” 200m from the main island whenever they need to go to the toilet. Wow!

The Uros have a school on one of the islands and they make money through selling fish and reeds on the mainland, although their main income now comes from tourism. We felt a little obligated to buy some of the local handicrafts, but we resisted the pressure. Instead, Aleecia and I took a ride on a boat made out of reeds for 10 soles each.

After our visit to the Uros Floating Island, we travelled by boat for another hour to Amantani Island, where we were hosted in small groups by local families. Our host “Mama” was a bit on the quiet side, but she was a great cook and welcomed us warmly into her lovely home. She was the mother of 9 children, which seemed rather common on Amantani Island. Our room was warm and comfortable, and we weren’t at all cold in the night. Interestingly, the house had basic electricity (only lights, no charging facilities), but no running water. Water has to be carted up by donkey from the lake! Don’t expect a flushing toilet, a shower or wifi.

Lunch consisted of a very yummy Quinoa and vegetable soup, followed by root vegetables and cheese similar to haloumi. After lunch we had a bit of free time and then we met up with the other gringos for a hike up to Pachamama, one of the two mountain peaks on the island. Unfortunately, Aleecia was feeling the effects of the high altitude, so she opted for an afternoon nap instead. The hike was fantastic, although somewhat tiring in the thin air. From Pachamama we could see all the way to Bolivia on the other side of the lake! There is a temple on top of the mountain; we each circled the temple three times, leaving a little stone at the temple each time and making a wish. We stayed on top of the mountain until after sunset; eating chocolate, drinking overpriced beers and taking funny silhouetted photos as the sun went down.

Once back down the mountain, we had dinner back at Mama’s and then it was time to get ready for the big fiesta! Mama dressed us up in the traditional clothes of the Amantani people and then we joined the party in the town hall with the other tourists and their host families. There was a wonderful, festive atmosphere and the local band was fantastic – they had everyone up and dancing! I assume they do this every night, but you wouldn’t have known – the locals seemed to be enjoying themselves just as much as we were.

Thankfully, we didn’t have too late a night at the fiesta, as we were up by 6.30am the following morning for a pancake breakfast. Then it was time to say goodbye to Mama and get on the boat for the ride to our final island, Taquile.

Taquile Island is famous for its handicrafts, which are knitted exclusively by the men of the island! After a short hike from the harbor to the plaza, we had time to admire (and purchase), some of the locals’ handiwork. Then it was off to lunch at one of the local restaurants, where we could choose omelet or trout, or a combination of both, for an additional 20 soles per person. While lunch was being prepared we learnt about some of the rules and traditions of the people of Taquile Island. Residents of Taquile Island are required to wear traditional dress while on the island, which includes special hats. Depending on how the hats are worn, they indicate whether the wearer is married, single or interested in a relationship!

After lunch we hiked to the harbor on the other side of the island, where our boat was waiting to take us back to Puno.