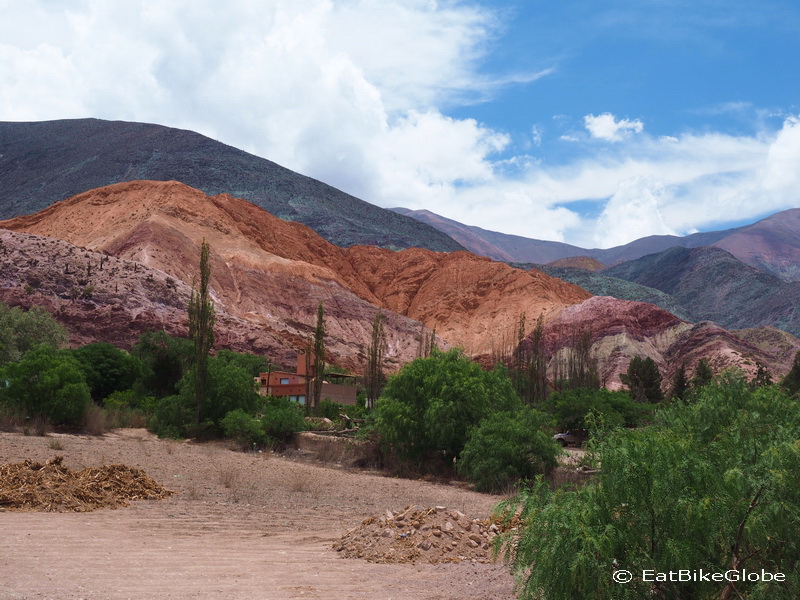 We recently cycled from the border of Argentina to Salta via the Jama Pass (Paso Jama).  We had originally been planning to cycle to Salta via the Sico Pass, as it is meant to be the more interesting and beautiful route, but we needed to get to Salta as quickly as possible so that David could visit a dentist.  He endured terrible toothache on the Laguna Route and the dentist in San Pedro de Atacama did not have an x-ray machine.

If the Jama Pass route is uninteresting, then Paso Sico must be truly amazing, as we found the route to be very beautiful and a great alternative to the Sico Pass!

Here is an overview of our 4 day journey from the Jama Pass to Salta with Vincent and Mylene. It is detailed for our own records, so feel free to skip ahead to the photos!

Still tired from our Laguna Route crossing and Christmas celebrations, none of us could face the prospect of cycling back up the boring 43kms climb that we had descended so eagerly on our way to San Pedro de Atacama 6 days before. So we organized transport to the Argentinian border for us and our bikes. Our driver picked us up at 7.30am and drove us to the border (156kms), which took about 2.5 hours. It was cheating, we know, but we’ve climbed enough mountains over the last few months and we looked upon it as a little Christmas present to ourselves! This saved us about 2.5 days of riding. Unfortunately, as soon as we unloaded the bikes from the truck, we noticed that I (Jo) had a flat tyre. Great.

We had thought that we would have to pass through Chilean immigration in San Pedro de Atacama, as this is the procedure when you cross from San Pedro de Atacama, Chile into Bolivia. But, if you are travelling from Chile to Argentina via the Jama Pass, you can complete all of the immigration formalities in Pueblo Jama – all in the same building! We have never seen a border quite like it before – it was incredibly cooperative between the 2 countries. Make sure you have the sheet of paper with your bike serial number on it, as you need to hand this in at the customs counter.

By the time we passed through immigration, it was around 11.30am. We were all tired from Christmas Day celebrations, so we tiredly mounted our bikes and started pedaling off towards Salta. Thankfully, there wasn’t too much climbing on this day and for once, the wind gods were in our favour! The terrain was primarily undulating, with one good downhill. We passed one salt flat, Salar de Olaroz, but generally the scenery was pretty barren on this day.

At around the 80km mark, we came across a series of abandoned buildings, which would have been great for camping, but it was only 4.30pm, so we decided to push on a bit further towards Susques. We commenced the ascent up to the Abra de Taire, but by 5.30pm Mylene and I were both exhausted, so as soon as we saw a possible wild camping spot, we decided to call it a day. We ended up camping above a dry river bed amongst some sand dunes. We cooked a yummy pasta dinner, enjoyed the lovely sunset and then fell into bed!

This was a much more interesting day of cycling than the day before. The scenery alternated between desert, canyon lands and salt flats and was quite varied. The ride was much hillier than we had expected, but again, this kept things interesting as for the first 50kms we were either puffing up a hill or cruising down the other side of one.

After 20kms or so we came to the town of Susques. It was a pretty bleak place, full of rubbish and dogs (although we didn’t have any trouble with them). We were able to buy water here, as the tap water in the area is not potable.

Around lunchtime, we reached a small section of canyon lands, full of cacti. For me, this was the highlight of the day’s cycling and we stopped to make a hot lunch here. Funnily enough, about 20 meters further down the road, there was a Brazilian cyclist who also stopped for lunch there. What a shame that neither of us cycled those few meters further, otherwise we could have all eaten lunch together!

The last 50kms were relatively flat. I would normally have enjoyed this, however we felt pressured to cycle as fast as we could, as there was a massive storm gathering behind us and we needed to made camp before the downpour hit. Unfortunately, we were cycling into a massive headwind, which didn’t help our progress.  We passed through the Salinas Grandes (salt flats), stopping only briefly to snap a couple of photos before continuing on. We have seen enough salt of late in Bolivia, so we didn’t feel the need to stay longer, plus we were trying to escape the storm.

Approximately 5kms after Salinas Grandes we came across a series of sand dunes/quarry, which looked promising as a wild camp spot (we found other tyre tracks, so other cyclists have stayed here before too!). Mylene and I went to explore and found a raised spot, next to a dry riverbed, which we thought would be suitable.  We frantically set up camp as a few rain drops started to fall. David dug a big trench around our tent as a precaution, but in the end the storm seemed to change direction and we didn’t get more than a few rain drops … at that time. Later that evening a sand storm blew up. After our experience in Baja California, we immediately sealed our tent (4 season tent advantage) to keep the sand out. Unfortunately, Vincent and Mylene didn’t have that option (3 season tent) and their tent got filled with sand.

Overnight, the storm finally hit, but David’s trenches worked and we remained snug and dry in our tent!

This was another fabulous day of riding, starting with a big climb up to the top of the Cuesta de Lipan. I was feeling pretty energized on this morning and I powered my way up the 21km climb, only stopping once to take a couple of pictures.  On top of the pass a massive truck transporting liquid gas had rolled over … oops! We watched as one tiny tow truck tried to rescue it – it was never going to work – they needed a crane!

From here it was almost all downhill, other than a 3km climb around the town of Volcan, but with terrible headwinds all the way. In total we descended 3245m on this day  – wow! The descent from Cuesta de Lipan was great fun, although the surface was a bit patchy in parts, and the scenery was stunning – mountainous and desert like, with beautiful pastel colours.

We met 2 Argentinian couples cycling on this stretch and we stopped to chat with them both in a mix of Spanish and English. They were super friendly and very enthusiastic about us cycling in their country.

As we continued onto the town of Purmamarca, the pastel colours of the mountains intensified – it was gorgeous! We stopped in Purmamarca for more water and had lunch in a little café on the main square.

After spending so much time in the desert and at altitude, Vincent was especially keen to see some green landscapes and some water! Luckily for him, as we started to descend from Purmamarca, the scenery gradually started to change from predominantly brownish/purplish desert hues, to lush green jungle.

Our goal for the day was a campground in Jujuy, but when we arrived, a rather unfriendly lady informed us that the place was no longer a campground. We had cycled 120kms by this point and were reeling at the prospect of having to cycle further. Thankfully, David found Jujuy Hostel on maps.me, which was only about 3kms away and had a 4 bed dorm available. We shared the dorm with Vincent and Mylene  for USD 10 per person – it was perfect!

This turned out to be one of our favourite days of cycling on our whole trip!

We got up early, as we had a booking for an apartment in Salta that evening and we knew that today would be a hilly ride. On reception that morning in our hostal was a cycling enthusiast from Salta, Tito, who kindly advised us of the best way to get out of Jujuy. He drew us a map and recommended that we cycle via San Antonio and El Carmen and then turn right onto Highway 9. This route added an extra 10kms or so to our day, but it was SO worth it. Gone was the desert; from Jujuy to Salta we cycled through lush, verdant countryside! It wasn’t at all what I had been expecting from Northern Argentina.

Following Tito’s instructions, we navigated our way easily out of Jujuy. There was a lot of traffic in Jujuy, but the cars and buses were very patient with us. However, as soon as we left Jujuy, the traffic vanished and we found ourselves cycling on quiet country roads, past large country estates and golf courses. The first 25kms were almost all uphill, but then we coasted downhill into the town of San Antonio and 10kms or so later, into El Carmen. Leaving El Carmen we jumped on the local bike path for a couple of kilometers until it ended near La Cienaga Dam.

From here we started to climb again on the curvy and narrow Highway 9. This place was alive with insects and wildlife! We cycled past cows, horses, a hawk/falcon and a little green snake, which had its head up ready to strike – ahh! Oh, and the butterflies! I have never seen as many butterflies as we saw on this day! Everywhere you looked there were white butterflies floating in the air – I tried to dodge them, but there were so many that I ended up hitting a few! Not all of the residents were friendly, however. We all got chased by some vicious looking dogs as we cycled past one farm house and David got stung by a wasp! Thankfully, he found out that he wasn’t allergic.

We had lunch on top of the pass and then enjoyed the downhill into Salta, cycling past lakes and rivers and through little holiday towns. It was all very idyllic. We are looking forward to more days like this along the Carretera Austral.