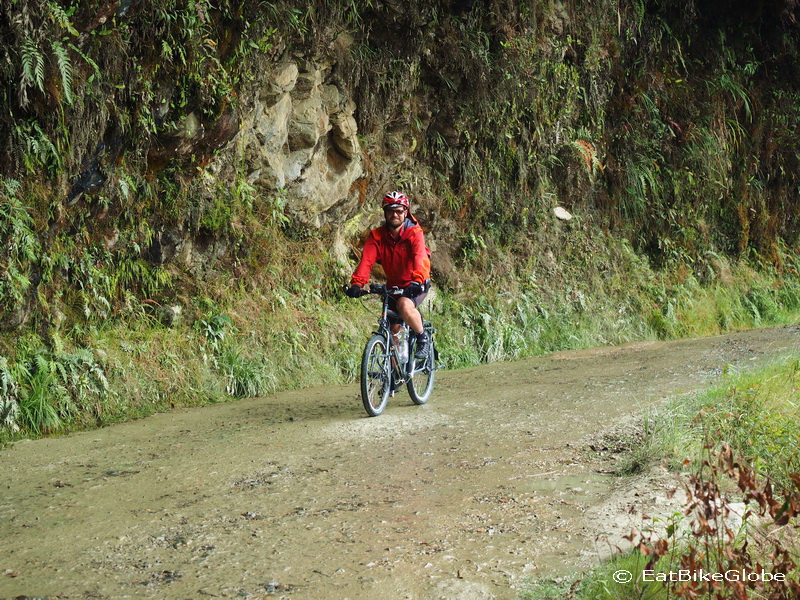 In addition to cycling the Laguna Route and the Salar de Uyuni, the one thing that David really wanted to do in Bolivia was cycle the famous “Death Road”! We considered taking a tour with one of the many tour companies who offer this ride (such as Gravity), but as we already had bikes, our preference was to ride the Death Road independently. The only problem was the logistics of getting to and from the Death Road. Thankfully, we found the answer to this problem on the wall of La Paz’s “Casa de Ciclistas”, which detailed the name and telephone number of a reliable van and driver, which was able to transport 6 bikes to and from the Death Road. There were 5 other cyclists staying in the Casa de Ciclistas at that time and 4 were interested in doing the ride with us. Hannes, who spoke the best Spanish, called the driver and organized the van for the following morning. The cost of the van and driver for the full day was 700 B (USD100), which we agreed to split amongst the 6 of us.

The van and driver were fantastic – we basically had a support vehicle for the entire day! We were picked up at 7am from the Casa de Ciclistas and taken to La Cumbre pass, for the first part of the ride. This first section is normally cycled on asphalt on the new highway; however, Christian from the Casa de Ciclistas recommended that we take the “Old dirt Road”, which runs alongside the new highway, to avoid the traffic. I didn’t get much sleep the night before, so I opted to cycle this section on the new highway, but the other 5 took the Old Road. It took me less than 45 minutes to zip down on the asphalt to the meeting point, while the others took 3 hours on the Old Road, as Hannes got 3 flat tyres.

By the time the other 5 reached the meeting point, it was pouring with rain! Hail followed shortly afterwards. Our driver took us to a restaurant near the start of the Death Road, where we had some lunch and waited out the storm. Given the reputation of the “Death Road” (otherwise known as the North Yungas Road), as the world’s most dangerous road, I was a little freaked about the idea of cycling it in the rain and hail, so I was very relieved when the storm passed.

My fears vanished when we actually started riding on the “Death Road”, as it was much wider than I had imagined (I had thought it would be a VERY narrow, windy ‘track’), it wasn’t particularly steep and it was so incredibly beautiful! We cycled past (and through) waterfalls and little streams, while surrounded by lush, jungle loveliness! The dirt road was rocky, but in good condition and we made it to the bottom, without any accidents, in around 2 hours.

Sadly, at least 18 cyclists have died on this stretch of road since 1998. We all agreed that we had cycled on more challenging and dangerous roads in Central and South America. I can only imagine that these accidents were caused by poor equipment, a lack or overestimation of skills (i.e. not knowing how to break properly), or traffic, as the road is pretty wide.

By the end of the ride, the 66kms of rocky dirt road had taken its toll. A number of bikes were rattling (mine included, as I had lost a screw on my mud guard). Nevertheless, it was a great day out and much cheaper than an organized ride along the Death Road!