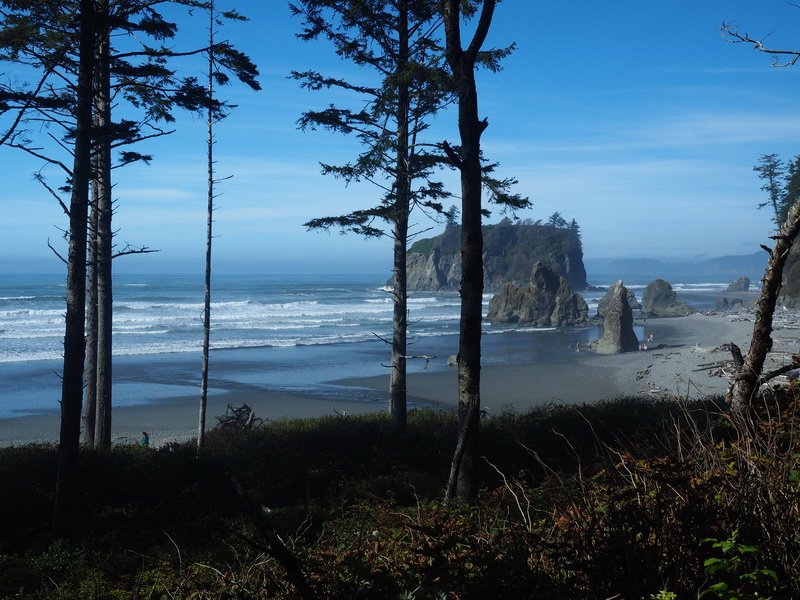 Our time in Canada was drawing to an end. We had planned to bike past Seattle, but Steve recommended that we take the ferry from Vancouver to Vancouver Island and then over to Port Angeles and bike the Olympic Peninsula.  Thankfully we agreed, as it was a great ride!

Here is an overview of our trip from Vancouver Island to Portland via the Olympic Peninsula. Its quite detailed for our own records, so feel free to skip ahead to the photos!

Steve kindly offered to drive us to Tsawwassen (South of Vancouver) to catch the ferry to Swartz Bay on Vancouver Island (thanks Steve!). Thankfully we left early, as Steve’s car had a flat tyre, but we made it in time for the 11am ferry to Vancouver Island. The ferry takes 1 hour and 35 minutes to make the crossing and we were off the ferry and peddling towards Victoria by 1pm along the beautiful Lochside Bike Trail. The ferry to Port Angeles was scheduled to leave at 4pm and we knew we would need to pass through U.S. customs before boarding. We had planned to spend the night in Victoria, thinking it would take us longer to exit the ferry at Swartz Bay, but as it was only 34.5kms along the bike path to the ferry terminal in Victoria, we figured we could make it if we set a reasonable pace.

The Lochside Bike Path is beautiful and very well maintained. We meandered along beside beaches, wetlands and farmland, down tree lined country lanes and through tidy residential streets.   It was very picturesque and quaint and we highly recommend it.  We only took one wrong turn, which added a few extra kilometres, but on the whole it was very well sign posted.

We made it to Victoria around 3.20pm and bought our tickets for the ferry ride to Port Angeles. Victoria is a beautiful harbor side city, with some very grand buildings. I really wished we could have stayed longer to explore, but we only had time for a quick trip around by bike and a few photos before boarding the ferry to Port Angeles.

We pulled into Port Angeles around 5.30pm and were off the ferry and through U.S. customs by 5.45pm. We had planned to bike to a nearby campground, but after a quick stop at the local outdoor shop and supermarket, we discovered that the nearest campground was roughly 15kms away on a hilly highway, with limited shoulder and it was already getting dark.  So we decided to spend the night at the All View Motel and tackle the highway on Saturday.

Much to David’s horror, today we rode from Port Angeles to Forks, where the Twilight novels were set and stayed at the Bogachiel State Park near Forks. Whether you love or hate the novels, there is no denying that they are set in a beautiful part of the world.

I was pleased that we had chosen to stay in Port Angeles the night before, rather than tackle Highway 101 in the dark, as it was hilly and windy. We had been told by the staff in the Port Angeles outdoor shop that a lot of cyclists get hit while cycling around Lake Crescent, so I was a little anxious about cycling this section. They were right. The road around the lake is obviously so dangerous for cyclists that a sign with flashing lights has been installed to warn cars and trucks, in particular logging trucks, of the presence of cyclists on the road around the lake.  I was impressed and slightly unnerved at the same time. We dutifully pressed the button, and the lights on the sign started flashing, giving us one hour to make it around the lake. As we only had an hour to make it past the lake before the sign stopped alerting cars to our presence, we felt some pressure to ride swiftly, but we still managed to take some pictures of Lake Crescent, which is a gorgeous lake. Thankfully it was Saturday and there weren’t any logging trucks rushing past (only light car traffic), as it was a VERY windy road, with minimal to no shoulder. If at all possible, I wouldn’t recommend cycling this road during the week.

We wound our way along Highway 101 through the lush Olympic National Forest, passing the road to La Push beach and onto the town of Forks. As a Twilight fan, I must admit to being a little disappointed by Forks – it is clearly trying to cash in on the Twilight craze.  Numerous signs for “Twilight Tours” and “Team Forks” lined the main street.  I didn’t recognize a single building. There was an abundance of accommodation options, but we were happy to peddle out of Forks to Bogachiel State Park, where we stayed in our first special Hike / Bike campsite for only $12 – bargain!

We only made it 50kms from Bogachiel State Park to Kalaloch Campground because we were so busy sightseeing! Highway 101 winds its way through forests (a number of them heavily logged) until it hits the coast, which again forms part of the Olympic National Park. We explored some of the beaches, including the stunning Ruby Beach, and went for a little bike/hike amongst some “Tall Cedars”.

We camped at the popular Kalaloch Campground, which was right on the beach and strangely covered in fog. We couldn’t find a bear bin for our food, so we left them on the bikes.  In the middle of the night we were awoken by rustling sounds. David heroically jumped out of the tent to find a cheeky raccoon trying to get into our panniers! We put them in the Ladies toilet after that.

This was a big day – 115kms from Kalaloch Campground to Hoquiam. Given our short day of cycling the day before, we were keen to have a bigger day, but we started a bit late after chatting with a couple from Melbourne who were motor biking up the West Coast. We passed through the Quinault Indian Reservation and past Amanda Park, with logging trucks frequently speeding past. This section of the ride was less pristine, as we passed through areas that were either currently being logged, or which had previously been lodged and had been replanted. We contemplated cycling back to the coast along the Moclips Highway, hoping to avoid some of the logging trucks, but we wanted to reach Hoquiam, so we persevered with Highway 101.

We saw lots of tiny snakes on the road (thankfully not poisonous!).  I accidentally cycled over one and David got sprayed with snake guts ….

I set myself the goal of riding 5kms every 15 minutes and we eventually reached Hoquiam around 6pm and found a campsite at the Hoquiam River RV Park. The campground was one of the friendliest that we have been too. One of the quirky permanent residents, Gin, drove me to the local bottle shop to buy some beers on the first night and lent us a lantern when she saw us eating our dinner by torch light! We liked it so much we decided to stop for a couple of rest days in Hoquiam.

This was our biggest day of cycling on this tour, but after a couple of rest days in Hoquiam, we managed it pretty well. The terrain was hilly for most of the day, with a flattish section towards the end, before we hit the Astoria Bridge. It was also very foggy.  On the first major climb we could only see about 3 meters in front of us and there were logging trucks whizzing past, although they generally gave us a lot of room. Around lunchtime we met an older US man who was cycling from Port Angeles to Eureka and stopped for a brief chat.  He described the road as “lumpy” and didn’t appear to be enjoying it at all. We generally like hills though and were enjoying the challenge.

The fog cleared after the first few climbs, but returned in the afternoon when we hit the Columbia River, just prior to the start of the Astoria Bridge.  We had met another cyclist earlier in the day who had asked if we were going to cycle across the Astoria Bridge.  We said “Yes” and he said “Really, well there’s a really big incline on the bridge”.  I remember thinking, how bad can it be? Its just a bridge….

The Astoria Bridge was almost completely obscured by the fog when we started to cross it.  It is 4.1 miles long (over 6kms!) and we could only see about 4 meters ahead of us.  Cycling across the bridge was eerie. Cars and seagulls appeared out of the fog.  There was a narrow shoulder for us to cycle in, but it was littered with dead seagulls that we had to swerve to avoid. Then out of the fog the bridge began to rise sharply in front of us (a 6% incline), but there was no turning back … we were committed.  I changed into an easy gear and spun my way to the top, hoping that the cars would see us in the fog. When we finally reached the top, I breathed a sigh of relief and coasted down to the other side.  Perhaps it wouldn’t have been too bad without the fog, but what were the engineers thinking?  I hope we don’t come across too many bridges like that in the US.

We camped that night on a golf course at the Lewis and Clark Golf Course and RV Park and ordered very bad takeaway pizza for dinner!

We planned to be in Portland by Saturday afternoon and had roughly 180km to cycle. After a fabulous big brekkie at Stephanie’s Café, we decided to cycle along the safest and most direct route to Portland along Highway 30, which generally had a wide shoulder.  After the long day of cycling the day before, we had a shorter day on Friday (66kms) as I was feeling quite tired. We spent the night in a motel in Clatskanie and cycled the remaining 112km to Portland the following day.

Cycling through Portland was a great experience. We cycled almost entirely on bike paths or bike designated streets, including along the vibrant waterfront. Like Vancouver, Portland clearly is a very progressive, super bike friendly city! We loved it.

Anne and Craig, friends of one of David’s TDA buddies, had kindly offered to host us in Portland. On Saturday night Craig took us to the Hopworks Urban Brewery Bike Bar for burgers and ales! We ordered the big beer sampler to share, which included 16 beers and 2 ciders! The Bikebar was really cool and environmentally friendly. We particularly loved the energy generating Plug-Out exercycles, where you can cycle on exercise bikes out the front of the bar: 15 min of cycling generates electricity to power the bar = $1 towards your next beer!

We had a great rest day in Portland with Anne and Craig.  Anne is quite the domestic goddess! After a delicious frittata breakfast, we went for a hike to the stunning Horsetail Waterfalls and the Columbia River Gorge. In the evening we had BBQ Salmon – yum! Thank you so much for having us Anne and Craig.  We hope to return the favour one day in Melbourne!