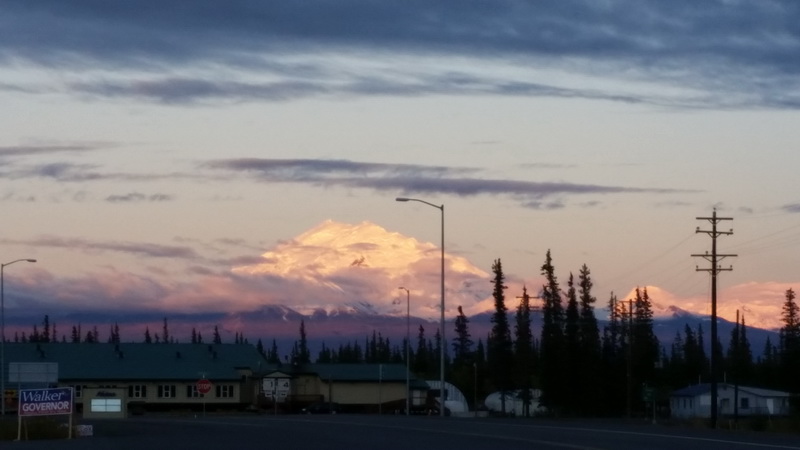 The first section of our journey from Anchorage to Tok, Alaska is over … what a week it has been!

We absolutely LOVE Alaska! The Alaskans are super friendly and hospitable, the roads are excellent and the scenery is amazing – its like cycling through a postcard!

Week 1 has largely been a week of settling into life on the road:

Here is an overview of our trip from Anchorage to Glennallen.  Its quite detailed for our own records, so feel free to skip ahead to the photos!

Day 1 started late (around 12pm … which, unfortunately seems to be our new norm), as we were still trying to organize our gear. But, we eventually made a wobbly start out of Anchorage on our far too heavy bikes. The fact that we had packed too much was clearly apparent not only to us, but also to one of the locals who called out “What the … you’re carrying a whole home on your bikes!”

The ride out of Anchorage went relatively smoothly, car horns honked in support and passing locals shouted out their “best wishes”, which lifted our spirits even higher! We only took one wrong turn leaving Anchorage, which was easily corrected and we soon found ourselves on a massive bike lane (like a mini highway for bikes!) alongside the Glenn Highway. Lunch was an unhealthy, but convenient, MacDonalds stop with Wifi at Eagle River, the first town after Anchorage. The bike path eventually ended around 40kms out of Anchorage and then we had to make do with the shoulder alongside the Glenn Highway. Surprisingly, there was a lot of traffic flowing into and out of Anchorage, but the shoulder was pretty wide and apart from the odd car parked on it, it was a relatively smooth ride.

We saw “Moose” signs along the highway, but didn’t see any wildlife that day. The Glenn Highway veered off towards Palmer and after perusing The Milepost (our trusty travel guide for the Alaska and Canada parts of our journey), we chose the Foxrun Campground a couple of miles before Palmer (it wasn’t a particularly difficult choice as we were parked across the road from Foxrun at that point and right next to it was an espresso stand which claimed to have the best coffee in Alaska!). It didn’t look particularly beautiful from across the highway, but it was a gorgeous little campground next to a lake and the campsites were in prime position. We chose one next to the lake in a little wooded area – just beautiful. We were the only cycle tourists and attracted a bit of attention from the other guests. We “enjoyed” our first camp dinner – 2 freeze dried ready meals … not bad actually after a day of cycling.

Eventually we surfaced from the tent (around 10.30am) and David made us porridge for breakfast. Then began the task of repacking everything that we had unpacked from the night before! I’m sure seasoned cycle tourers can accomplish this whole morning routine in an hour, but the whole exercise seemed to take us a very long time and we didn’t roll out of Foxrun Campground until 1pm (our latest start ever!).

We only cycled about 5 meters before we saw a cycle tourer coming from the other direction – Thomas from France. Thomas had been wild camping for much of his trip and had taken 6 months to cycle from Halifax, Canada to Anchorage (he liked his rest days). He gave us an overview of the terrain from Palmer to Glennallen and said that we should stay at Red Eagle Lodge (in between Glennallen and Tok). We wanted to talk to Thomas for longer, but as we had only started at 1pm, we quickly said our goodbyes and carried on cycling.

We passed Sutton (and had another quick MacDonalds lunch stop) and then carried on to Chickaloon following the Matanuska River. The traffic was much lighter on the 2nd day and we were pleased to see that the cars gave us so much room on the road.

On the 2nd night we stayed at the gorgeous King Mountain State Recreation Site on the banks of the Matanuska River for $10. We were the only campers and had the pick of the campsites! We chose a beautiful secluded one with views of King Mountain. We had another meal of ready meals – Spaghetti Bolognese and Thai Beef Curry, with Chocolate Cheesecake for dessert! Not fabulous, but it hit the spot. We would highly recommend this campground if you are in the area. It is pretty basic, with drop toilets and you need to treat the water, but it is quiet and beautiful, with a very friendly host.

We tried to make packet cinnamon pancakes for breakfast, but we couldn’t regulate the temperature enough on the camp stove and they kept sticking to the fry pan, so we ended up with porridge again.

By the time we were on the road it was 11.30am … we definitely need to work on our morning routine! It was pretty miserable weather on Day 3 and much hillier than the previous 2 days. The temperature dropped as we started to climb higher and we eventually pulled out our winter gloves and rain coats.

The highlight of Day 3 was seeing two moose on the side of the road! We were a safe distance away and I tried to take some pictures of them, but they moved into the woods as soon as they noticed our presence.

It was starting to rain by the time we spotted the Matanuska Glacier. We contemplated staying at the Matanuska Glacier State Recreation Site, but the forecast was for rain, and we didn’t fancy packing up a wet tent the next day. We wanted to push onto the Grandview Café and RV Park (which had cabins and wood oven pizza(!)) as we had only covered about 40kms that day due to all the hills, but my back was killing me and we came across the “Long Rifle Lodge”, which had cabins, a restaurant and a bar. By this time it was properly raining, so we happily booked ourselves in for the night and feasted on burgers, homemade rhubarb pie and more Alaskan ales in the restaurant overlooking the Matanuska Glacier! Long Rifle Lodge was a great find. Although the rooms were a bit average, the restaurant and service were great! The restaurant was decked out in true Alaskan style with lots of stuffed animals … it felt a bit like a museum (see the pictures). We chatted with some other Canadian diners and had a great time … we would have stayed longer, but we got kicked out at closing time … 8pm.

It poured with rain overnight and it continued on Day 4, so we decided to take a rest day and stay another night at the Long Rifle Lodge. We went through all of our gear and decided to send a big package on to Mexico and a smaller one back to Australia. Unfortunately, there was no post office in Glacier View. The next post office was in Glennallen and wasn’t open on weekends.

Thankfully, the weather was a bit better on Day 5. Long Rifle Lodge makes amazing giant “Glacier Cookies”. We had one of those each for breakfast and headed off to Nelchina, roughly half way between Glacier View and Glennallen. We cycled over the two highest points on the Glenn Highway on Day 5 – the Tahneta Pass (914m) and the Eureka Summit (1,012m) on Day 5. We were hoping to take photos at these milestones, but surprisingly, they didn’t appear to be sign posted.

Before we started towards the Eureka Summit we came across the Grandview Café and RV Park, where we stopped for lunch. The café was a little gem. Sparklingly clean, with a great menu (not just burgers and pizza), good coffee and friendly staff. I ordered a loaded potato to power me up the Eureka Summit!

My back was hurting again when we pulled into Nelchina. In a couple of weeks we want to be doing 100km + days, but we are easing into it so we don’t get sick or injured. We stayed at Nelchina Lodge, which was great. The lodge doesn’t provide meals, but the owners are super friendly and the room was very clean, with Wifi access. We asked if there was anywhere where we could get some beers from in town, the owner said that the next store was 10 miles up the road and then gave us 4 cans on the house – you have to love Alaskan hospitality!

On day 6 we cycled to Glennallen. We had a reasonably early start and arrived pretty early around 2pm. We met some American cycle tourers – Dusty and Jordan – outside of IGA, who are cycling to Seattle. We checked into the Northern Nights Campground and RV Park and spent the afternoon doing chores – waterproofing the tent and doing laundry. Northern Nights isn’t the most picturesque of campgrounds, but the facilities were super clean and the staff really friendly and obliging. Interestingly, Glennallen is a dry town, but the owner offered to drive us to the nearest bottle shop to get some beers! Super nice

As the only cycle tourers in the campground, we again attracted a bit of attention, with a lot of the RV travelers coming over to say hello and inquire about our trip – really nice and social.

For dinner we followed Erica’s recommendation and went to “Tok Thai” – a little caravan at “The Hub” (the junction of the Glenn Highway and the Richardson Highway) where a Thai lady cooks up traditional Thai food for locals and travelers. We had been looking forward to eating at Tok Thai since Erica told us about it in Anchorage and after 6 days of cycling, we were not disappointed! The meal was made even better by the view of Mt Drum in the distance.