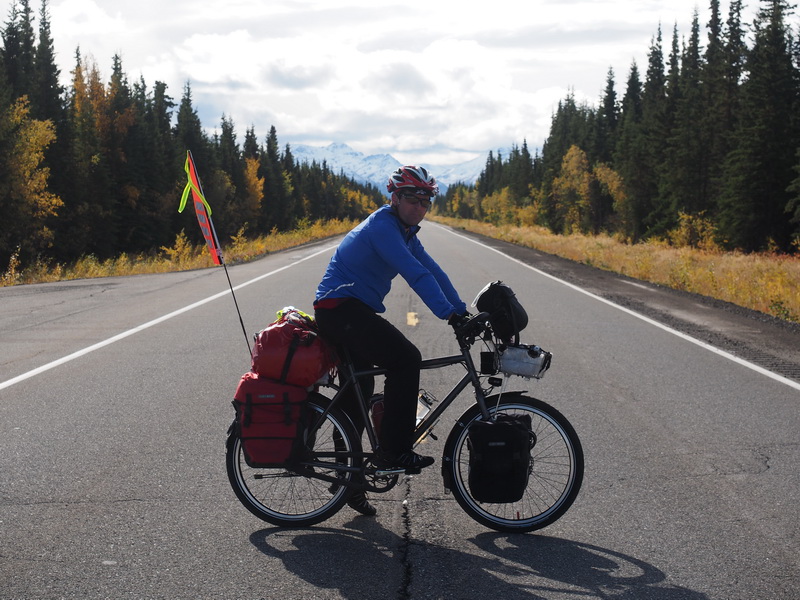 Here is an overview of our trip from Glennallen to Tok. Its quite detailed for our own records, so feel free to skip ahead to the photos!

On Day 7 we had another late start, as we had to visit the Post Office and stock up our supplies at the local IGA. We started peddling around 2pm and had 76kms to cycle to Christochina. It was a stunning ride – some uphill, but mostly flat or downhill and it was made better by the sunny weather! We made very good progress, but with the spectacular views of the snow topped Mt Sanford on our right, we couldn’t help but stop frequently to take photos!

We also stopped a few times to say hi to other cycle tourers.  We met a Swiss guy and two Canadian girls at Gakona Junction who were heading the same way as us and two other American girls who had cycled up through Canada from Portland a little later on. It was a very social day!

The Canadian girls were wild camping, but we pushed onto Red Eagle Lodge following Thomas’ earlier recommendation. We are so glad that we did.  It is by far, the BEST place that we stayed along the Glenn Highway.  The campsite was a bargain at $15 (other campgrounds charge $25) and the owners, Richard and Judy Dennis put on a fabulous continental breakfast spread for their guests each morning for $7 – BONUS! Red Eagle Lodge is a historic roadhouse site with its own runway – pretty cool! They have a number of gorgeous rustic cabins to stay in, but also welcome campers. We pitched our tent on the lawn and enjoyed the luxury of the “Bathhouse”.  David cooked us a fabulous dinner of spaghetti, with tomato, tuna and olive sauce – yum! We had a good chat to a couple of hunters who were stopping at the lodge on their way to Tok for the shooting season.

We had requested breakfast at 9am in the hope that it would make us get up a bit earlier on Day 8.  Breakfast was served in the Dennis’ own beautiful dining room in the main lodge and the table was full of guests when we arrived just after 9am, including the two Canadian cycling girls who had stopped by for a cup of tea and who had been invited to stay for brekkie! We chatted to the other guests and swapped cycle touring stories with the Canadians – one of the girls was just finishing a massive 15 months cycling trip around the world. Very cool. After the other guests left and the Canadian girls departed, we chatted with the owners, Judy and Richard.  They were the loveliest people and were more than happy to answer our questions about Alaska. We could have chatted with them all day, but had to drag ourselves away as we still needed to cycle to Mentasta Lodge by the evening.

We had another great day on the road, with more spectacular scenery.  David stopped at one point and got off his bike. I slowed to wait for him to catch up and he appeared holding a massive Smith and Wesson Magnum 500 gun that he had found on the side of the road! We felt a bit weird carrying the gun and immediately decided to hand it in to the State Troopers in Tok, but after hearing stories of a wolf chasing a cyclist along the Alaskan Highway last year, we also felt somewhat comforted by our find and the pepper spray that we’re carrying!

We stayed at Mentasta Lodge on Tuesday night.  The Lodge was under construction and they do not allow camping, so we decided to take the last cabin (I wanted a shower). We had burgers for dinner and read about the next stage of our journey in The Milepost.

Mentasta Lake to Tok was another beautiful ride.  It had some climbing, but was mostly downhill and we even had a tail wind towards Tok.

I am already feeling stronger on the bike and my back is hurting less by the end of each day, which is great.

We had to visit a number of campgrounds before we found one that was open for camping in Tok – two were already closing up for winter. We need to get across the border asap. We made a quick stop at the State Troopers to hand over the gun (we may even get a reward!) and then stopped at the grocery store for a quick chat with a female cycle tourer from the Netherlands. She has been cycling since July and is heading in the same direction as us, so we may meet up with her again along the way.

We ended up staying at the Tok RV Village, which has good facilities and friendly staff, although it is a little pricey. We were told that “Fast Eddy’s” was the place to go for dinner and as they had free wifi and a salad bar, we decided to check it out.  It was pretty busy and seemed as though everyone in town was there for the night. It’s a little tired and needs a makeover, but was reasonably friendly and I loved being able to get fresh salad.