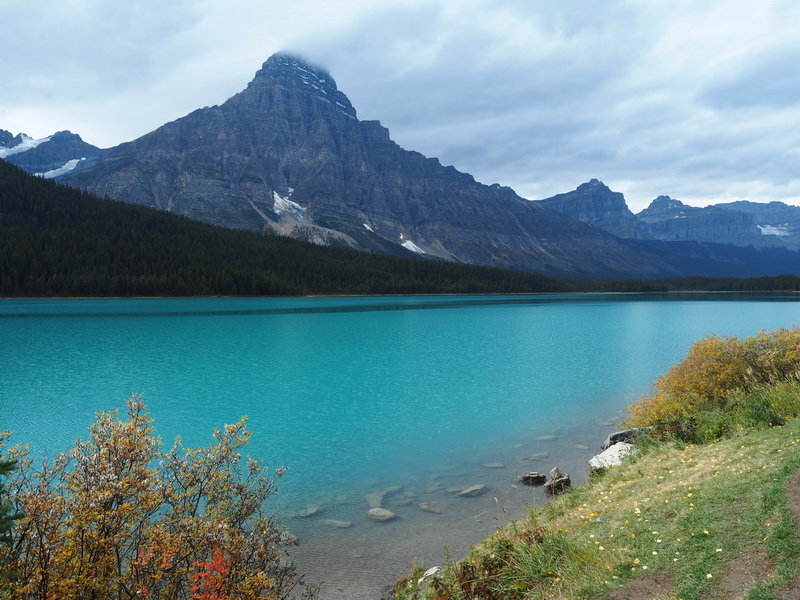 When we got to Whitehorse we reluctantly made the decision to put our bike trip on hold and hire a car to drive from Whitehorse to Vancouver. It was a tough decision. We really wanted to cycle the full length of the Alaskan Highway, but we hadn’t realized the extent to which Northern Canada shuts down from September 1st. More than half of the campgrounds and grocery stores that we passed were already closed and it was only mid-September. We spoke to truck drivers who said there was already snow on the Alaskan Highway. We contemplated catching a ferry like some of the other cycle tourers that we had met, but we still wanted to see Canada and the Canadian Rockies, so hiring a car seemed to be the best option for us.

We stayed with a number of David’s friends from Tour d’Afrique on this leg of our journey. Thanks to Kim, Scott, Danielle and Steve for hosting us.  We had an awesome time with you and look forward to returning the favour in Melbourne one day!

Here is a high level overview of our time from Whitehorse to Vancouver.

We had a great couple of days in Whitehorse with Kim. We frequented some of the local watering holes, had an tasty dinner at the Klondike Rib and Salmon Restaurant, went for beer tasting at the Yukon Brewing Company, had a dinner party at Kim’s with some of her friends (Kim cooked up an amazing Greek feast!) and had a fabulous day trip out to Skagway (in Alaska), where we sampled spruce tipped ale!

I love “random acts of kindness” and we try to practice this when we can to give some kindness back and create some good karma for our trip. We have a lovely memory of an opportunity for a “random act of kindness” in Whitehorse. The Yukon is pretty pricey, so we wanted to stock up for our road trip at one of the local supermarkets in Whitehorse. For spending over $200 (pretty easy in the Yukon), we got a FREE turkey! We thought it might be a cooked turkey, which we could eat for lunch, but it was GIANT frozen turkey. As Kim is vegetarian we couldn’t give it to her, so instead we gave it to a friendly looking lady coming out of the supermarket who looked a little in need.  She was overjoyed and said we had made her month!

Our first day of driving in Canada was like a Canadian Safari!  Up until this point, we still hadn’t seen any bears; only a few squirrels and 4 moose. We saw more signs alerting us to upcoming animals than we saw animals and we were starting to doubt whether there really were any bears in Alaska and Canada! This all changed on our way to Liard Hotsprings. We saw our first bear, a majestic grizzly, herds of bison (I would have been pretty unnerved cycling past some of the bulls) and a family of shy mule deers. Just magic!

Another highlight was seeing the “Signpost Forest” in Watson Lake. Both bizarre and pretty cool at the same time.

We camped that night at the beautiful Liard Hotsprings National Park, which is open all year.

We started the day with a dip in the Liard Hotsprings.  Wow!  The hotsprings are nestled in a little forest at the end of a long wooden boardwalk. There is a beautiful wooden deck and change room, all very natural and in keeping with the surroundings. The hotsprings are otherwise completely in their natural state; there are pebbles underfoot, ferns and trees to look out upon and no concrete – just gorgeous! If you are even in the vicinity of the Liard Hotsprings, do yourself a favour and go for a dip.  You won’t be disappointed.

After our swim, we piled everything back into the car and continued on our Canadian safari.  We didn’t see any more bears or bison, but there were stone sheep and caribou to be seen, as well as the gorgeous Muncho Lake. We stopped for lunch at the Organic Vegetarian Café and Coffee Bar in Fort Nelson. The café/healthy food store has a brilliant assortment of healthy(ish) treats and is definitely worth a visit if travelling through Fort Nelson.

We planned to stay in Pink Mountain that night, but it was full of dust, trucks and miners. We continued onto Fort St John and spent the night camped on the lawn outside the front of The Shepherd’s Inn.  The inn was completely full, but hearing that we were cycle tourers from Australia, the kind manager said we could camp on the grass out front for free!

From Fort St John we continued onto Dawson Creek, which marks the end of the Alaskan Highway. The lady in the Tourist Information recommended that we take Highway 97 to Prince George, as it was a prettier drive, but it rained continually, so there wasn’t much sightseeing for us. We passed through a massive storm on our way to McBride, where we planned to camp that night and happened upon the Scarecrow Farm, which offers camping on their extensive grounds with amazing mountain views.  What a find!!! We were the only campers that night, so we had the pick of the campsites, each of which included a table and a little campfire with free fire wood.  They even have a spa which you can use for a couple of extra dollars! We can’t recommend this place highly enough.

From McBride we drove to Jasper. We didn’t realize we would have to pay to drive on the Icefields Parkway (a pretty steep $19.60 for one day), but its worth it to drive through the heart of the Canadian Rocky Mountain Parks. Jasper is a cute little mountain town, much smaller than Banff. We would have liked to have more time there, but it was cloudy and drizzling in Jasper, so we didn’t hang around for long.

Driving along the Icefields Parkway was pretty spectacular.  It is 232km long and it would have been amazing to cycle, with ancient glaciers, gushing waterfalls and pristine mountain lakes to view at every turn. We were constantly stopping to take pictures of the dramatic scenery and as the day continued, so thankfully did the weather.  We made an obligatory detour to see the famed Lake Louise.  It was late in the day, but was still crowded with tourists and is overlooked by some pricey looking hotels and lodges. Although it is beautiful, we much preferred the less touristy Lake Moiraine and Bow Lake.

We drove into Banff around 5pm. Even though it was a Thursday, it was buzzing! It is clearly a tourist mecca and reminded me a bit of Queenstown in New Zealand. We decided to stay a bit out of Banff, camping on the edge of Two Jack Lake and were spoilt with lake views. Leaving Two Jack Lake on Friday morning, we spied a couple of elk grazing in a meadow – they were beautiful to watch. It certainly is a very special part of the world.

We had a brilliant time in Calgary with Scott, Scott’s girlfriend Danielle and Danielle’s sister Carmen (who makes the best muffins!). Calgary is definitely a cool city and given its proximity to the Rockies, is great for mountain sports (and they have GREAT coffee!).  We went for a challenging (near vertical) hike up Mount Lady MacDonald (I was sore for days afterwards!), a bit of shopping in Canmore and Calgary, a spot of sightseeing around Calgary, including the controversial Peace Bridge and some excellent coffee shop hopping to satisfy my coffee addiction! On Sunday night Scott made pulled pork …. OMG! We had never tried pulled pork before and we can’t get enough of it now.

We had planned to drive to Vancouver via the Glacier National Park in the US, which we had wanted to bike through, but the weather forecast was pretty dismal, so we decided to skip it and drive to Vancouver via the Canadian Glacier National Park and Vernon and Kelowna, which are located along the Okanagan Lake. No doubt it is a beautiful lake, but it was another rainy day and the lake was grey, rather than the shades of emerald and blue that we had heard so much about. The weather forecast was better in Vancouver, so we decided to push onto Vancouver ASAP, stopping after dark to camp at Lake Harmon on the Monday night.

We arrived in Vancouver around lunchtime on Tuesday. We had arranged to stay with another of David’s TDA friends, Steve, in Vancouver.  Steve picked us up at the hire car place (thanks Steve!) and spent the afternoon showing us around his neighbourhood, including an excellent little Japanese restaurant.

David and Steve went mountain biking at Squamish on Wednesday, while I worked on the blog. They went for another mountain bike ride on Thursday morning and then we all went for Japanese at the little restaurant near Steve’s place (we loved it so much! David had 2 x lunch special!), and then a bike tour around Vancouver, including a loop of Stanley Park, before stopping in at the Marine Bar and Grill for refreshments and dinner at a little Thai place near Steve’s for dinner!

Vancouver is a fabulous city for biking. It was easy to see why it is ranked as one of the most livable cities in the world. We were especially impressed by the dedicated bike streets and the completely separated bike lanes in downtown Vancouver.  Please take note Melbourne!

Comments are closed. You can not add new comments.

Home » News » Whitehorse to Vancouver (by car)Back to top