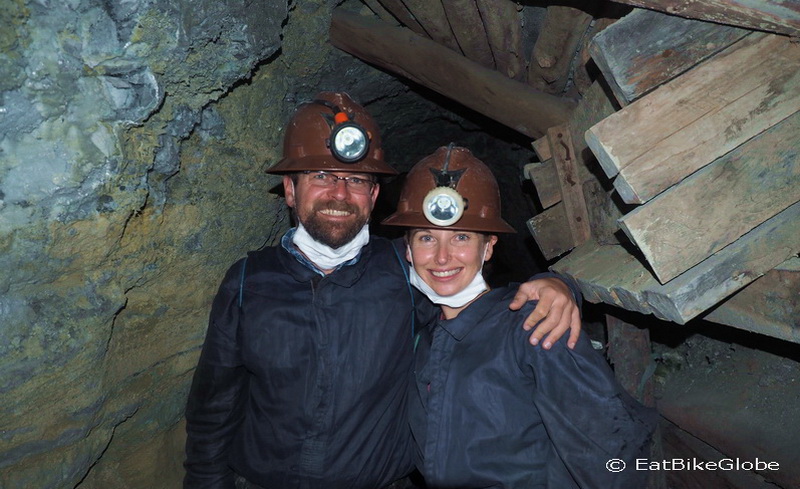 Before starting our crossing of Bolivia’s incredible salt flats, we visited Potosi and took a tour of the Cerro Rico Mines. Potosi, which is world heritage listed, is a beautiful city, with some lovely colonial architecture, but the city’s main attraction is definitely Cerro Rico (“Rich Hill”), which overlooks the city. Potosi was once one of the richest cities in the world, apparently rivalling the likes of Paris(!), and the silver extracted from the mine helped fund the Spanish empire.

Cerro Rico is known as the “Mountain that eats men”, as it is estimated that 8 million miners have died as a result of working in the mines since the 16th century. Working conditions in the mines are appalling and appear to have changed very little since that time. The miners worship “El Tio”, the god of the mountain and leave offerings of coca leaves and alcohol for him. Most miners will die between the ages of 40 and 50, due to silicosis (from breathing the dust).

The mine is still in operation, run by numerous cooperatives, which extract silver, tin, lead and zinc from the mountain. Visits to the mine are not without their safety risks – tunnels can collapse at any time. Nevertheless, we decided to risk it.

We did some research on the tour companies and narrowed it down to what appeared to be the top 3: Koala Tours, Big Deal and GreenGo Tours. In the end, we decided to go with Big Deal Tours, as it is owned and operated by 4 ex-miners, had the most enthusiastic sales pitch and the best ratings on Trip Advisor. We paid 150 B (USD 21) per person for the tour.  The tour included a visit to the Miners’ Market, the Refinery Plant, as well as two mines ´Rosario Bajo` and ´Candelaria Baja`, both belonging to the Cooperativa Unificada.

David liked the Miners’ Market – as it is probably the only place on earth where you can legally buy dynamite over the counter. You can also buy other necessary mining supplies like coca leaves, shovels, gum boots etc. and of course greasy, energy food!

The tour through the mines was undoubtedly the highlight. We got dressed up like miners, and spent several hours crawling through a maze of tunnels and climbing some very, rickety ladders (this was the scariest part for me). I hit my head on low beams about a dozen times – thank goodness for the protective helmet! The journey was quite fascinating. The tunnels were dark and damp, and at times, strangely beautiful with turquoise and green stalactites and other, often poisonous, colourful minerals. As expected, the working conditions were terrible and extremely primitive. We met a few miners in the tunnels and gave them the gifts we had bought at the Miners’ Market – coca leaves and fruit juice. They let us take photos, but weren’t particularly welcoming or chatty – fair enough, it’s a working mine, not Disneyland.

As we had spent the last 5 months at altitude, we didn’t have any problems with the thin air, but at over 4200m, I can imagine that a lot of people would struggle. You also wouldn’t want to be claustrophobic.

I can’t say that I “enjoyed” the mine visit, and I was VERY happy to get out of the mine in one piece, but it was an unforgettable experience and certainly puts one’s own working conditions into perspective.

TIP: If you want to meet miners on your tour, don’t plan your visit on a Sunday or Monday, as there are unlikely to be any miners in the mines on those days.

Home » News » Bolivia: Our visit to the Cerro Rico Mines at PotosiBack to top